Skip to content
Thomistic Institute > Publications > Did Aquinas Justify the Transition from “Is” to “Ought”? 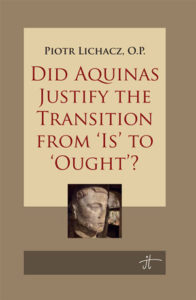 Did Aquinas Justify the Transition from “Is” to “Ought”? Did Aquinas Justified the Transition from “Is” to “Ought”? The answer to this question deeply influences the way of interpreting his philosophical and theological moral teaching. One recent and influential interpretation of Aquinas’s writings which takes for granted that generally there is no justification for such a transition and Aquinas did not even try to justify it or to make it, proved controversial.

This book is a comprehensive study that shows in what sense it can be said that Aquinas justified the transition from “Is” to “Ought.” A brief history of the “Is/Ought Thesis” and its analysis reveals that this meta-ethical principle has its roots in semantics, logic, epistemology and metaphysics. Following Aquinas’s order of learning the first part of the book (four chapters) treats his logic – including semantics and philosophy of science. In the second part (four chapters) some aspects of Aquinas’s natural science and metaphysics are explored in order to answer the question contained in the title. An earlier version of this text won the 2009 St. Thomas Aquinas Dissertation Prize awarded by the Aquinas Center for Theological Renewal at Ave Maria University, Naples, FL (USA).