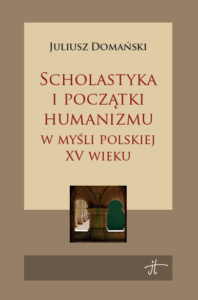 This book was originally published under the title The Beginnings of Humanism as part of a collection entitled A History of Medieval Philosophy in Poland. Now, as an independent volume with a new and more appropriate title, it retains its original content and quality: it was and is a study of the reception of Italian humanism in the writings of Polish thinkers who, for the most part, had been trained in the scholastic tradition and were professors at the University of Krakow in the 14th and 15th centuries. The book focuses on para-philosophical issues rather than philosophical ones, with humanism and scholasticism examined as intellectual cultures and systems of education.

The lengthy introduction presents an interpretation of both styles of formation. For contrast, the author juxtaposes scholasticism and humanism with other types of formation in the late Middle Ages.

The first part of the book deals with the influence of 14th- and 15th-century Italian humanist writings in Krakow in the 15th century, and how these texts were received by scholars trained in the scholastic manner. The opening chapter explains why the author chose to focus on the reception of humanism and shows how difficult it is to pinpoint the influences of Italian humanism in those writers who are usually called the first Polish humanists. In fact, these scholars produced no works of their own but limited themselves to correspondence with Italian thinkers and to collecting their works. The second chapter is a kind of annotated catalog of works by early Italian humanists that were owned by scholars connected with the University of Krakow. The third chapter is an attempt to discern how aware the Poles who read these works were of their difference from scholastic texts, and to what degree they considered humanistic and scholastic writings similar. The analysis is based on manuscripts of miscellanea of scholastic and humanistic texts that were compiled in Krakow. The fourth chapter of this part examines the first attempts to consciously imitate the humanistic style of Latin in Poland and a few contemporary Polish theoretical commentaries on this style.

The second part of the book deals with four themes common to scholastic and humanistic para-philosophical thought. The first chapter in this part deals with history and historiography in relation to philosophy. Here, the main focus is the characteristically humanistic tendency to look at history and historiography from an epistemological point of view, which is echoed in the meta-historical opinions of four Polish authors of different backgrounds, scholastic and non-scholastic. All of these authors believe that individual examples of virtue are more edifying than the abstract teachings of moral philosophy and that these examples should be preserved in human memory through the writings of historians. The second chapter of this part is dedicated to political philosophy, and specifically to the dialectic between moralism and pragmatism, two values that usually exclude each other. The third chapter describes two styles of life – active and contemplative – that also seem mutually exclusive. The active or pragmatic style of life is usually more closely associated with humanism than scholasticism, but Polish thinkers of this period rarely made that distinction. This was due to two factors: the complicated relationship among political, ecclesiastical and social forces in Polish society, and the mixed formation of Polish scholars, which frequently included both scholastic and humanistic elements. The last chapter of the second part is a reflection on the essence and aims of philosophy. Scholastic intellectual culture tended to define philosophy as an investigation of reality, and only that, while humanists claimed that philosophers should live out their knowledge by leading an ethical life. This latter notion was, without a doubt, a dominant theme of Polish meta-philosophical thought in the fifteenth century, yet it was expressed both by the few Polish thinkers who had been influenced by Italian humanists and by many scholars formed in the scholastic tradition. We must conclude, therefore, that the meta-philosophical opinions of Polish philosophers at this time were influenced more by late scholasticism, which in its regard for practical expression of the philosophical life had much in common with humanism, than by humanism itself.

The brief conclusion of the book contains the following observation: In 15th-century Poland, “humanist ideas were most frequently expressed in personal correspondence between Italian humanists and the masters of the University of Krakow or Polish diplomats; outside this channel, humanism had narrow influence, and Polish scholars limited themselves collecting humanists’ works and imitating their literary style. As we move into the wider realm of discourse, humanism seems to vanish amid more influential streams of thought. Indeed, one may say that the more general an idea was, the less likely it was to have its origin in humanism.”