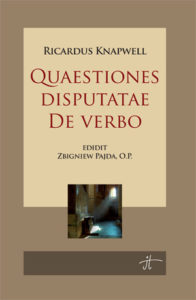 This book contains questions by Richard Knapwell that have never been published before. Knapwell is one of the most significant representatives of the first Thomistic school at Oxford.

Unfortunately, the documents we have do not allow us to reconstruct the biography of Richard Knapwell with any precision. The records that have survived indicate that the most intense period of his creativity was between 1270 and 1286. It is to Knapwell that scholars have attributed the authorship of a work known as Correctorium corruptorii ‘Quare’ written in defense of Thomas Aquinas during the years 1282-1283.

The author himself is relatively well-known among Thomistic scholars due to his conflict with the Franciscan school, which centered on the Thomistic definition of substantial form in man. Knapwell’s position in this dispute finds expression in a question entitled De unitate formae published by Francis E. Kelley (“Biblioth?que thomiste,” 44, Paris: Librairie philosophique J. Vrin, 1982). This conflict ended when the Archbishop of Canterbury, John Peckham, excommunicated Knapwell and forbade him to teach. It was a difficult time for the entire Dominican Order. While there may be some doubts as to whether this manner of ending the dispute with the Franciscans was motivated by doctrinal considerations alone, it is certain that the excommunication and sanctioning of Knapwell was a regressive step that retarded the development of the first Thomistic school at Oxford. Knapwell was freed from ecclesial punishments in 1288 by Pope Nicholas IV but never returned to teaching. He died in Bologna a few years later. Knapwell, like many other Dominicans of this period, was not an adherent of the thought of St Thomas from the beginning of his career. He became a Thomist gradually – a process that was accompanied by the pronouncements of successive General Chapters of the Order, which at first defended the thought of St. Thomas and later sustained its development and ensured its survival as the foundation of theological instruction in the Order.

The questions presented in this volume are drawn from two manuscripts: Assisi, Biblioteca Comunale, 158 and Cambridge, Peterhouse 128. The first deals with the real difference between an act of the understanding and a word arising from the intellect. The second deals with the manner in which words are formed in an act of knowing. The next three questions discuss the beatific vision enjoyed by the saved in Paradise. The last question addresses the unity of the person in the context of the incarnation of theWord of God. All of these questions testify to the lively presence of the Dominicans at Oxford; they also allow us to follow the development of the debate in which was born what we now call the first Thomistic school at Oxford. They are a modest addition to our as-yet-incomplete knowledge of the tumultuous history of this school. They are also a record of how Dominican friars created a new way of thinking in the course of their disputes by drawing upon the innovative ideas bequeathed to them by Thomas Aquinas while preserving their own individual voices.